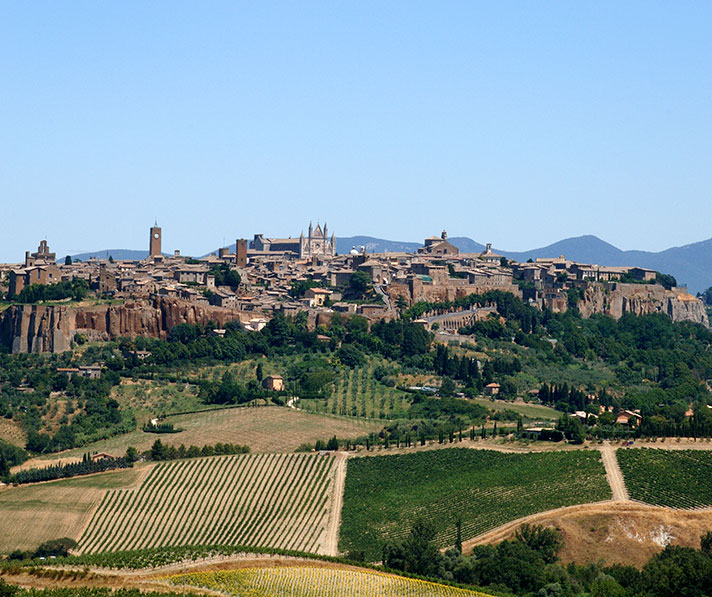 Orvieto is an ancient city, full of secrets and curiosities and is one of the few that has had the honor of giving its name to its wine, such as Barolo and Barbaresco. Settled on an impressive tuff cliff, 325 m above sea level, overlooking the valley below created by the eruptive action of the Vulsini volcano, called “Velzna” by Etruscans (from “vina” or the word “vineyard” in Etruscan language) were the first to vinify inside the tuff caves taking advantage of humidity condition and constant temperate. The pressing of the grapes and the first fermentation took place in the wormer area near the outside, the second part of the fermentation and fining took place in other area dedicated. Aristotle called Orvieto Oinarea in a 3rd century writing a.C., as the city where wine flows and this shows fame throughout the history of the city and its wine, so appreciated that painters such as Pinturicchio and Signorelli asked to be paid with orvieto wine for the works carried out inside the Orvieto Cathedral. It is no coincidence that sinuous vine beams adorn the beautiful façade of the Duomo, and that we find the frescoes or god Bacchus sculptures the on the most elegant palaces. For long time Orvieto was part of the Papal State and many popes were great admirers of The Wine of Orvieto so much so that the Orvieto was renamed the “Wine of the Popes”. The wine in Orvieto was produced everywhere, vineyards were also on the cliff in the period of the free municipality. Behind the cathedral there was a large vineyard and also the area that extends from Cahen square to beyond the church of the Servants of Mary was renamed “great vineyard”.
There are many anecdotes and legends about orvieto wine. Story goes that Garibaldi chose the wine of Orvieto to toast with the Thousand to the “good luck of Italy”, while the great poet Gabriele D’Annunzio renamed Orvieto wine as “the Sun of Italy in the bottle”.

FacebookTwitterLinkedInWhatsAppPinterestEmail
Page load link
Technical and third-party cookies are used on this site. By continuing, you consent to its use. Privacy Policy Ok
Go to Top